I have a backlog of garden from the past 11 months that I haven't posted yet, and in the past, whenever I've missed a few months of Garden Bloggers' Bloom Day, I've included my backlogged photos in the new month's post. This time, though, I've missed more consecutive months than ever before, and I simply can't possibly catch up with the backlog. Instead, for now I'm just going to try to keep up with the current blooms. Maybe when the current bloom season winds down, I might have time to go through the backlog and post some 2016 photos in the appropriate months of 2017 (June photos in June, July photos in July, and so on).

I will post about Barry's house first. And for this first picture, I do have a couple of comparisons from earlier in the year!

Here is my beautiful boyfriend's front yard, as of a few days ago. In the lower right, you can see the "Native Plants live here!" sign I received during the Fall 2016 California Native Plant Society sales. They were selling these signs but also giving them away to people who spent a certain minimum amount of money on plants. I always spend a lot of money on plants at these sales, so I got a free sign. I may get another one this spring or next fall for my own house. I gave the first one to Barry because his front yard is more nearly pure native than mine. It is all California native, and almost all locally native, except for two crepe myrtles (Lagerstroemia indica) and a Chinese pistache (Pistacia chinensis), which were the only plants in the front yard when I first went to Barry's house. The crepe myrtles (located on either side of the driveway, not visible from this angle) were planted by previous homeowners, coppiced (chopped down to ground level) before Barry bought the house, and covered with lawn. They resprouted after Barry bought the house and are now chest-high shrubs. I might try to kill them in the future. The Chinese pistache tree (visible below, currently leafless) was chosen by Barry and planted before he met me, and I plan to leave it alone, because it is a reasonably well-behaved and ornamental tree that is plausibly more marketable than a lot of the native options - and besides, if I tried to replace it now, it would take some years for a replacement to achieve comparable size (not that this tree is very big yet, but it is not fresh out of a pot, either) - so leaving it there could be a meaningful selling point for the house.

The plants currently blooming in Barry's yard are baby blue eyes (Nemophila menziesii), the only flowers you can see in this picture; Cedros Island vervain (Verbena lilacina 'De La Mina'), behind the Chinese pistache; cream cups (Platystemon californicus), on the other side of the driveway; and California buttercups (Ranunculus californicus), in the back yard. Well, and the deergrass (Muhlenbergia rigens) in the foreground of this picture. Also present in abundance, but not blooming yet, are Douglas' meadowfoam (Limnanthes douglasii), white meadowfoam (Limnanthes alba), California poppies (Eschscholzia californica), bird's eyes (Gilia tricolor), blue globe gilyflower (Gilia capitata), mountain garland (Clarkia unguiculata), and farewell-to-spring (Clarkia amoena). There's also plenty of other stuff that's less abundant, but those species are the ones I expect to make the biggest showing in the next few months. The Douglas' meadowfoam and California poppies at my house have already started blooming, but the ones at Barry's house were seeded later in the season because I was trying to beat back the weeds to make room for them, so their bloom season is being delayed due to their delayed planting time. Otherwise, they should start blooming sooner at Barry's house, because it is (as the crow flies) nearly 35 miles south of mine, and bloom season moves progressively northward over the course of the spring. None of the baby blue eyes at my own house have started blooming yet, but the ones at Barry's house are at peak bloom now. 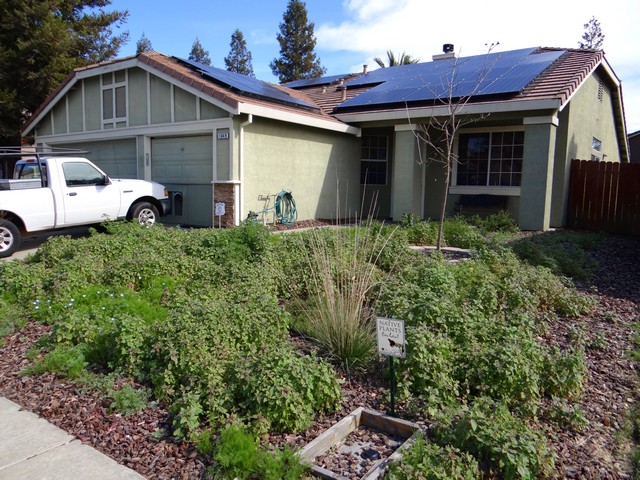