This is my first time cross-posting between LiveJournal and Dreamwidth. I have the same username on both sites. I'm not sure yet which one will be my primary account in the short-term future, but LiveJournal is no longer feeling to me like it can be relied upon to have much a long-term future. I do not think LiveJournal's Russian management is likely to attempt to impose significant free-speech restrictions on English-language accounts, because Vladimir Putin has little reason to care about what Americans writing in English think of him. However, I think LiveJournal's business decisions lately seem designed to drive the company into the ground. As I understand it, the main reason LiveJournal acquired such a large userbase in Russia in the first place was precisely because Russian users wanted to host their journals somewhere that wasn't in Russia or subject to Russian law, so the decision to move LiveJournal's Russian free accounts to servers in Russia can only scare Russian users away. LiveJournal's Russian paid accounts are apparently not being moved to servers in Russia, which I guess might be some incentive for Russian users to pay for their accounts, except that those users are still forced to accept LiveJournal's new terms of service that apply Russian restrictions on political (and LGBTQ+) speech. Between that and the fact that their friends with free accounts must be leaving in droves, I can't imagine that this is a sustainable way to run a business in Russia. I can only infer that Putin and his underlings must have offered LiveJournal's Russian management a large enough bribe for suppressing free speech to make it wothwhile to them to utterly destroy LiveJournal's profitability. Meanwhile, we English-speaking users are relatively fewer in number, and furthermore, LiveJournal's management has now also destroyed the main remaining incentive for English speakers to pay for their accounts, because LiveJournal is now displaying ads on all journals, whether paid or not, to users who aren't logged in to a paid acount. Sure, paying for your account will still spare you personally from seeing ads on LiveJournal, but come on - if that's all you want, you can achieve that goal just by installing a free adblocker. The real motivation to pay was to have a journal that didn't look like trash to anyone else who visited it. Now, whether you pay or not, anyone who visits your journal will see giant banner ads on it. This is a stupid way to run a business. If paid accounts weren't profitable for LiveJournal, management could have raised the prices. By making paid accounts no longer worth paying for, management is making themselves wholly dependent on ad revenue alone, while simultaneously driving away users, which means they will receive fewer hits on their ads. This cannot possibly be a sustainable business model.

I've been on LiveJournal for almost 16 years, and I have a permanent account here. I have a big stake in the site's survival, because as long as it survives, I get to continue benefitting from all the perks of a permanent account (including a considerable amount of photo hosting, which Dreamwidth doesn't provide). But I have no actual ability to stop the site's management from making suicidal business decisions, and that is what they appear to be making lately. Therefore, I am not expecting the site to survive very much longer, and I'm trying, regretfully, to prepare for its demise as best I can.

Anyway, let's get on with this.

This past weekend, while Barry spent most of his time playing and/or running board games at ConQuest Sacramento, I went on a portion of the Gardens Gone Native Tour. I just went to the two gardens in Woodland and the six gardens in Davis, out of the total of 28 gardens. I don't think it's actually possible to see all the gardens in one day unless you really hurry through them. I might have made a gardening friend at the second garden I visited; I struck up a conversation with the homeowner/gardener and gave her Barry's address and invited her to see the native garden I've planted in her yard, and gave her my own email address so we can talk native plant gardening. We agreed that it's nice to know someone else who has a native plant garden nearby. The next garden I visited after that was the only other one that made a strong impression on me; in that garden the homeowners weren't home, but the woman showing people around the garden explained that the homeowners had been ripping out California golden poppies (the state flower) and purple needlegrass (the state grass) because they didn't like the look of them. I remove a few purple needlegrass seedlings myself when they show up where I don't want them - or I transplant them to Barry's house - but I thought it was rather hilarious that anyone with a native plant garden would be ripping out California golden poppies because they don't like the look of them.

Anyway, after I finished the portion of the tour I wanted to see, Barry wasn't home yet, so I decided to go back out in search of native plants in a different location: Mavis Henson Field. This is a local park of sorts that I found out about via the LocalWiki entry for Mavis Henson Field, which makes it sound like a great place for seeing wildflowers. But I had tried to find the field once before, with Barry, and we had failed to find it. This time, when I tried again, I realized that the directions on LocalWiki were inorrect; the field is on the opposite side of County Road 25 from where the directions claimed it was. But I figured out where it was because it was supposed to contain a lake, so I looked for a lake. The field still did not turn out to be a good place to see wildflowers, though, except maybe for the select few wildflower experts who are allowed into the fenced area where the meadow and vernal pool habitat are. For the rest of us, it is a pretty good birdwatching park and a decent place to see some native shrubbery, but it's the wrong place to go to see annual wildflowers.

Still, I took some pictures while I was there. I didn't feel comfortable taking a lot of photographs during the garden tour, but taking photographs of Mavis Henson Field was unlikely to bother anyone. So now I'm going to take you on a photographic tour of Mavis Henson Field in Woodland, California. Here are a silver bush lupine (Lupinus albifrons) and a Western redbud (Cercis occidentalis) among miscellaneous grasses alongside the parking lot. In the background, a family is riding bikes on the gravel path around the lake. 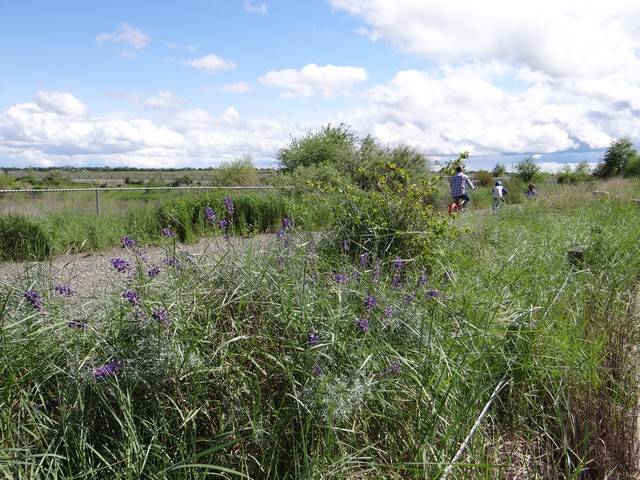