I'm several days late for May Garden Bloggers' Bloom Day, but here I am at last. Let's just say I was somewhat delayed by the fact that I set my boyfriend's front yard on fire . . . with hot pink flames made out of flowers. Specifically, mountain garland (Clarkia unguiculata) - a species known for putting on a big show in late spring, much like its cousins whose common name is farewell-to-spring. 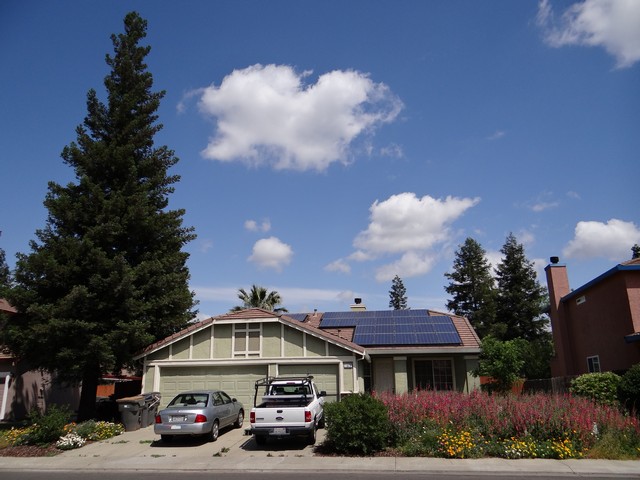 But I will show you more of that later. Right now, three different versions of my gardening self are having an argument about their vastly different gardening skill levels. It is clear to all of them that the me who gardens in Barry's front yard is the most talented gardener, and the me who gardens in Barry's back yard is the least talented gardener, while the me who gardens at my own house is somewhere in between. But they are arguing over the finer details of that. They all have different advantages: Barry's Front Yard Me (BFYM) and Barry's Back Yard Me (BBYM) have an ever-so-slightly milder climate than My House Me (MHM) . . . not so much that you'd really notice, if you're a human, but if you're a plant who spends all day long and all year round outdoors, you might. The two houses are less than 40 miles apart as the crow flies, and they are both in the Sacramento Valley, and they both see similar levels of frost in winter and similar levels of heat in summer. But the summer heat cools off slightly more at nighttime at Barry's house. On the other hand, MHM generally has a somewhat shadier garden than BFYM or BBYM. And then there's the soil. BFYM has several inches of pure compost on top of the native soil and a couple of inches of storebought cedar woodchip mulch on top of that. MHM has basically no compost but an inch or so of fairly dense mulch in most areas, made from a mix of storebought cedar woodchips and the naturally occurring detritus of the garden plants. BBYM has basically no compost and also very little mulch - just a very thin scattering of some sort of black-dyed woodchips and some twigs dropped from nearby redwood trees.

And they are going to hash out the results of their different garden conditions in photographs here. On Dreamwidth, not on LiveJournal, because apparently I have finally managed to write an entry that is simply too long for LiveJournal to handle, and so LiveJournal has refused to post it. New achievement unlocked? Not really an achievement I'd like to repeat, though.
Collapse