Barry and I went to Yosemite for the second time this year, from October 28 to 31. A certain exciting moment happened there, which I already gave away in the title of this post, but I'm going to try to stick to narrating this in chronological order.

So, I sort of decided in advance of this trip that I really wanted to get engaged during it, and I was probably going to be pretty seriously disappointed if I didn't get engaged during it. This was obviously problematic, because setting up an arbitrary deadline that required Barry's involvement and not even telling Barry about said deadline was clearly unfair to Barry. I tried to prepare some ways I'd be able to stop myself from being disappointed, but I had a feeling I'd probably still end up feeling disappointed anyway. So, taking a different tack, I tried to give Barry some advance warning. In a way, I already had: we'd agreed about two years ago on a time frame that we both felt would be an appropriate point for getting married ("in the third year of our relationship") and we'd arrived at that time frame; we'd subsequently agreed that we both wanted to wait for our most sickly and elderly pets to die first, and they both had died; we'd discussed engagement rings and I'd picked one out and told Barry about it a month or two earlier; we'd made several preliminary house-shopping trips; and I'd asked Barry, on one of the occasions when he was at my house earlier this fall, whether - since there is significant stuff I want to do to my house before we sell it - we could get married first and deal with house buying-and-selling afterward, and he'd said yes. So all signs were that we weren't on wildly different pages. But I still hadn't gotten Barry to specify what he wanted as an engagement ring, nor had he even gotten around to figuring out what size he wears. So it was hard to see how I could prepare a magnificent proposal for him when I couldn't possibly present him with a perfect ring. Also, frankly, it's very confusing to try to subvert the patriarchy by, if you are a woman, getting down on one knee before a man. It's just a weirdly submissive-seeming position to try to claim as a feminist act, you know? So I resorted instead to just dropping an inordinate number of hints, while also feeling bad about only communicating through hints, because in general I'm a great believer in just being bluntly direct about everything so as not to run any risk of misunderstandings.

This is why, on the weekend before our Yosemite trip, when I was saying goodbye to Barry in his driveway, I mentioned to him that according to the Internet being sprayed by the mist of Bridalveil Fall is supposed to improve your chances of getting married, and suggested that maybe I should take him to Bridalveil Fall while we were there. Then I also told him that if he really wanted to get me to stop looking at houses for a while (since we weren't really ready to buy yet), getting me focused on planning a wedding would probably be the one thing that would achieve that.

"So much pressure!" Barry replied, grinning. He must have gotten the hint, because apparently it was the day after that conversation that he placed the order for the engagement ring I'd told him some weeks earlier that I wanted.

And then it was the following Sunday morning, and we were stuffing everything into Barry's truck to go to Yosemite. I had printed out a bunch of directions to all sorts of places in and around Yosemite - more places than I really thought we were likely to have time to see - as backups in case the GPS on Barry's cell phone let us down. Barry had purchased some new rectangular bins to pack our equipment into, and he took a few minutes to work out the quirks of how to stack them and lash them to his truck's ladder rack so as to maintain a clear line of sight for himself. Then we were on the road! We listened to the mix tape I'd made a few trips ago, for our trip to Howard Creek Ranch Inn in 2017, of my favorite songs from various eras of my life; and we alternated it with some podcasts Barry wanted to listen to - primarily one called My Brother, My Brother, and Me, which involves three brothers intentionally dispensing bad advice to people. We stopped in the small town of Mariposa, where I bought Barry some gas, and then we entered Yosemite via the Arch Rock Entrance. We set up camp at the site I'd reserved for us, North Pines Site 103. There was a motorhome adjacent to us on one side, which was kind of nice because the people generally stayed inside it where we didn't see them, and there was a family of four from some European country on the other side of us, with children aged about one and four years old, speaking a language that resembled German but probably wasn't quite German. The one-year-old was a bit loud for a person in general, but probably rather quiet for a one-year-old. Here is our campsite, with Barry's yellow and black bins, my camp stove, and Barry's tent. 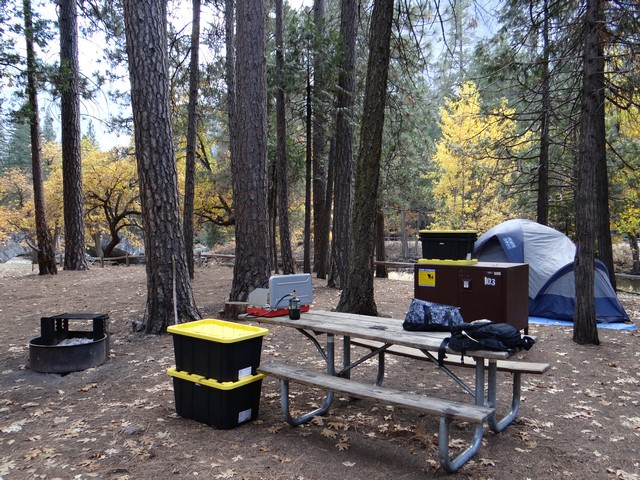 Our campsite was directly on the Merced River, near the bridge over the river. You can see the bridge a bit at the left side of the photo above, but you can see it better in the photo below, which shows the view from right next to our tent. 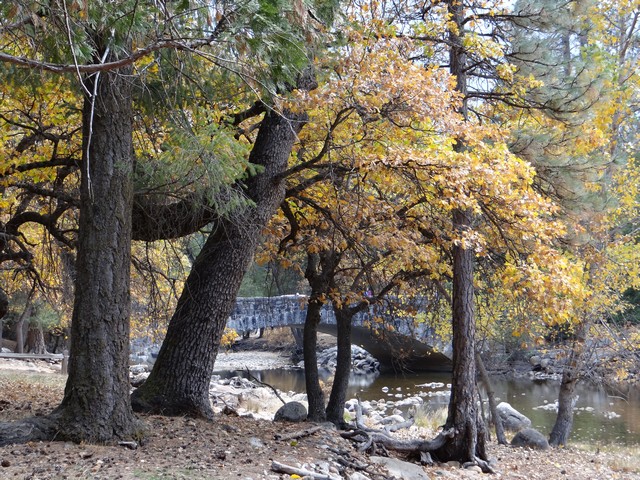