Although I've put it off for an entire year, I really do want to get around to writing about getting married last year. And also about our honeymoon, but that will have to wait still longer, for a separate entry. Here's hoping I can get through it all fairly soon, finally, after a year of delay. It is a little strange looking back at this biggest and fanciest event of our lives now that large events like this are no longer allowed, and now that our incomes are in extreme jeopardy from the economic crash, and so on. A year ago was a happier, easier, more innocent time. But I'm very glad we had it, very glad we got married at a time when all of this was still possible. A bit sad that we didn't also manage to sell my house back when house-selling was still easy and brought in more money - but hey, you can only do so much at a time, and getting married was what we managed to do. Selling my house, not so much. But we'll figure something out. For now, it's time to reminisce about getting married!

Barry and I were married on Saturday, April 13, 2019, near Santa Rosa, California, at the house of some friends of ours. These friends were originally Barry's friends, whom he got to know just months before his first wife dumped him, and thus about a year before I met him. They friends are rather wealthy and own three houses; the one we were married at is the one they bought most recently, in 2017, and is not their primary residence; they use it primarily for entertaining large groups, although their daughter and her fiancée live full time in an in-law apartment on the property. It has many bedrooms that just stand empty until there are guests staying the night; it's a little like a hotel, and they've seemed to really enjoy opening it up for any big party we wanted to organize there, even before we got married there. So they were among the very first people we told about our engagement. They immediately asked where we were getting married, and we responded by asking if we could get married at their house. They got so excited over the prospect and started asking so eagerly about what else they could do to help that I felt obliged to assure them that providing a venue was plenty of help already and that they should not feel a need to overexert themselves by offering even more than that. In the event, however, they also provided (and fully funded!) our rehearsal dinner, taking our immediate families and some of our wedding party out to dinner at the exclusive country club near their house. It was hugely expensive, I'm sure; I'm rather glad I never have to know exactly how hugely expensive.

We sent invitations to 57 people; 39 of them accepted, so when adding the two of us and the photographer, we planned for 42 people. One of the guests was unexpectedly delayed and then canceled entirely after our wedding was already underway, so we ended up with 41 people and one empty place setting.

Barry and I both poured a huge amount of planning into our wedding, and it was all extremely collaborative and extremely personalized to represent the identities of both of us. We designed and created the invitations ourselves; Barry created a design based on my ideas (a paper gatefold, with a lupine blue butterfly on a lupine flower in front of the gate, and a wooden insert inside the gate with the text of our invitation engraved on one side and a lupine flower engraved on the other side) and lasercut the paper and the wood for both the invitations and the envelopes we sent them in, while I composed the text printed on the invitations and hand-addressed the envelopes in calligraphy, using a postage stamp we found that had a closely related blue butterfly on it. The invitations contained a link to our wedding website, which told our story as a couple, which we wrote very collaboratively, trading edits back and forth for weeks. After the invitations went out, we also co-wrote the entire ceremony, not just our vows; we traded edits to this back and forth for weeks as well, and after we finally agreed on a draft, our officiant (an old friend of Barry's, who is a "reverend" in the Universal Life Church and also an atheist) added still more suggestions, comments, and questions, so we traded additional edits back and forth with him for a few more weeks after that. And then we also collaboratively co-wrote the program and other paper items handed out in gift bags.

And of course, we also collaboratively planned all the details of our clothes, the food, the drinks, the cake, the tables and chairs, the tablecloths and other décor, the dishes and silverware, the schedule, the entertainment, the song selection, and even our choice of last name. Barry lasercut wooden place markers with people's names on them to go on the tables at the reception, as well as wooden table numbers, wooden food labels for the buffet table, name stickers for our favor/program bags, engraved wooden dice box wedding favors, and wooden plant labels for my table centerpieces. I planted nine different white ceramic pots with native plants to be our table centerpieces, created custom native seed packets for each guest's specific neighborhood, and printed out the details of each seed packet's contents and some botanical trivia about each guest's neighborhood.

. . . The next day was our wedding day. We had until 1:30 p.m. to prepare for our wedding. I think we actually stuck pretty strictly to our planned schedule! I'm not sure who helped keep us on schedule. The photographer probably helped some. Probably also our hosts and our parents.

I immediately put on my full wedding regalia. Everyone else waited until closer to the time of the ceremony for at least some of it, and my mother advised me that I also ought to wait to put my cape on later, so as not to get it dirty before the ceremony. I said no - I was only going to get to wear this outfit once in my entire life, and I intended to wear it for all I was worth for the whole entire day. So that's what I did. And it was just fine, and I was glad of having worn it all day long.

On the morning of our wedding, Barry made some incredibly delicious scrambled eggs with a large bar of Velveeta melted into the middle of them and served them to everyone present who wanted some. The people present at that time were our hosts, their family, my parents, me, our officiant, the best man, and the best man's girlfriend. I enjoyed the eggs very much and felt privileged to be marrying the maker of such delicious scrambled eggs. 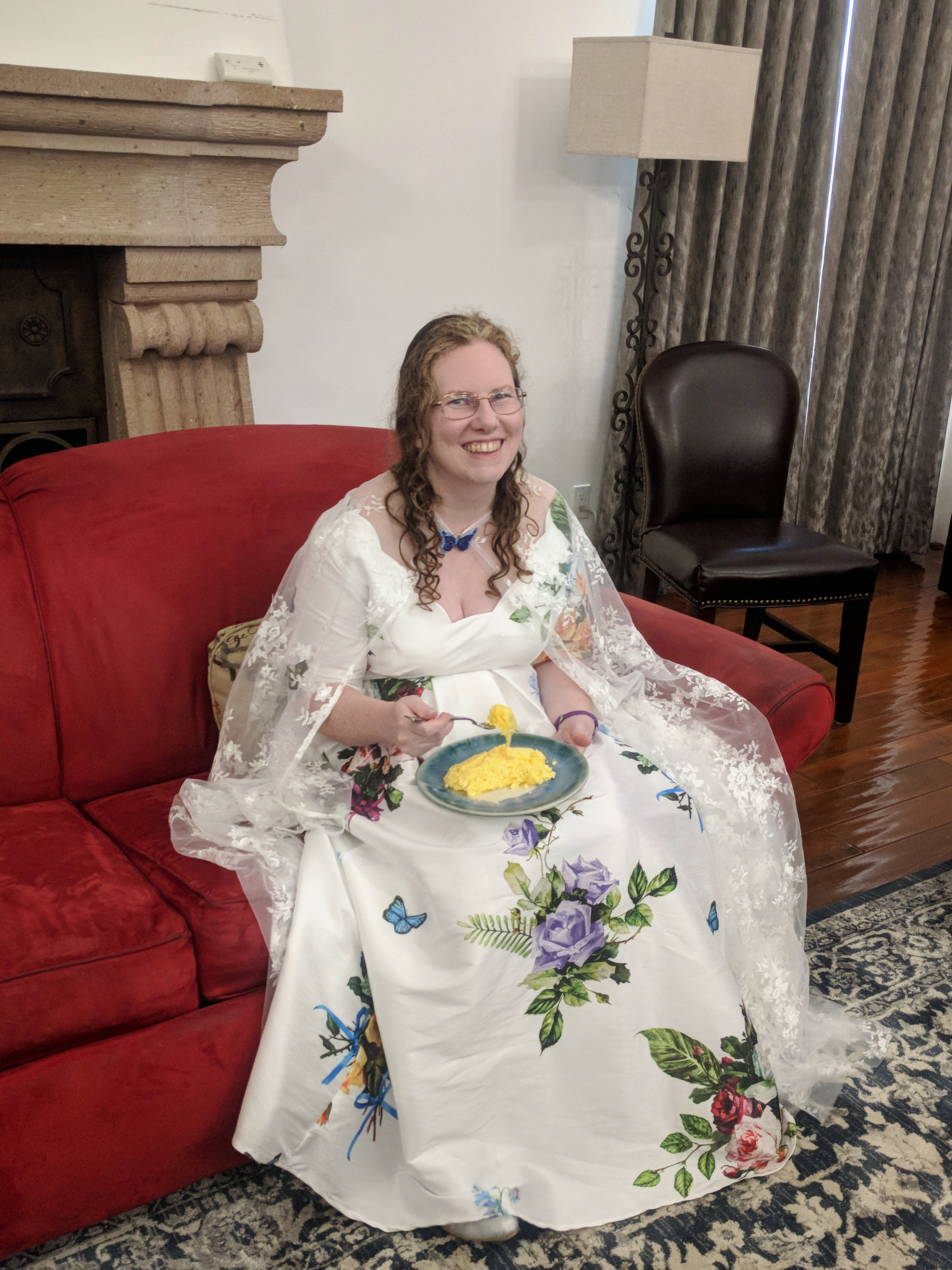